Global poverty is easy to ignore.

Until you learn its names and faces. 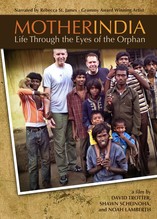 Mother India, a documentary releasing today, does just that, introducing viewers to a “family” of 25 orphans living near a train station in India. Filmmakers David Trotter and Shawn Scheinoha traveled to India for two weeks last year seeking to tell the story of life as an orphan in a country where an estimated 31 million children are considered orphans.

“Each of these young lives is much more than a statistic,” Trotter said. “Every one of them has a name, a face and a story.”

That’s what I found valuable about this documentary–the personalization of poverty. Because as Scheinoha added, “The bottom line is statistics go in one ear and out the other. People need to hear stories and see the reality of what it looks like for millions of Indian children who are orphaned.”

When you hear one girl describe how she was tricked into having sex for money, and you see the tears she sheds over her rescue, you can’t ignore the plight of the poor and orphaned.

When you listen as another girl describes how she lost two of her fingers because of her boyfriend’s jealousy, and how she still grieves the loss of a baby–“I cut myself when I remember him”–you can’t go back to the way things were.

These kids, whose experiences have aged them beyond their years, are escaping the daily pain through drug use, sharing needles and dying of HIV and AIDS. They barely “earn” enough money begging and washing the floor of the train to eat each day.

Take a look at the trailer for a preview of the film.

Sometimes, the scenes are too much, and I want to forget.

But how can you look away when you’ve seen too much?

The filmmakers found themselves faced with this question. Their intent was to document. But when they got to know the youngest members of this group–a 3-year-old and a 7-year-old, siblings–they asked what else they could do.

Mother India is a sobering reminder of how extreme poverty is in many parts of the world. It is also a call to action to provide help for India’s orphans.

This is no pleasure film, but it is worth your time (less than an hour). And it will melt your heart.

Word Films, distributor of Mother India, is offering a copy to you. Leave a comment on this blog between now and noon (Eastern) Friday, April 26 for a chance to win. I will pick a winner using Random.org and Word will send a copy of the DVD to the winner.

In exchange for my review, I received a free copy of the Mother India DVD.

4 thoughts on “When you can’t forget a face: DVD Review of Mother India”

What I write about