It was a beautiful Saturday evening when we ventured out for a long walk as a family around our neighborhood. There’s a picturesque path on the edge of town that offers a view of our humble borough that I can’t quite capture with a camera but that takes my breath away every time. My husband and I have taken this particular walk numerous times, and when we were training for a 5K (that feels like eons ago) it was one of our circuits.

On this night, we brought the kids, who we were certain would poop out before the end, but who said they were game.

All was well until we descended the hill back into town, toward the farm where our favorite cows live. A man jogging past us slowed down and said, “Watch out for the chicken. He’ll get ya!” My husband and I exchanged a look and offered him a patronizing “okay!” and a friendly wave. Seconds later, a car slowed down and the driver yelled out the window: “Did someone warn you about the chicken?” We said “yes” and they drove on. I’m not kidding you when I say that seconds after that, another car did the same thing, prompting our imaginations to create a chicken of Stay-Puf Marshmallow Man proportions (Ghostbusters, if you have no idea what I’m talking about). 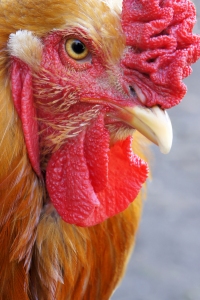 Not the chicken that chased us. In case you were wondering …

We became extra vigilant as we approached the farmhouse, and the kids were starting to sense it. Our 5-year-old started freaking out and our 3-year-old wanted to be carried. We spotted the chicken on the other side of the road (literally) and thought maybe we could sneak past without notice. Just as we were about to pass, one of the farmers rolled up in his work truck. He nodded in the direction of the chicken and said, “His name’s Henry. He’ll peck your shoelaces.”

We nervously laughed and kept walking, hoping the chicken wouldn’t see us.

It was false hope.

That chicken was across the road quicker than a “cock-a-doodle-doo.” Not knowing what else to do, we started running, which freaked our daughter out more and winded all of us. Let me offer you this word of warning: If you think outrunning a chicken is easy, think again! I know it wasn’t going to hurt us, but for a few moments, I felt like an actor in a horror movie being chased by a wild man wielding a weapon. That chicken could run. (Which by the way is one of the funniest things I’ve ever seen. Not at all graceful.)

We made it beyond the chicken’s borders, I guess, and were able to stop and catch our breath and calm our daughter and laugh a little. We weren’t far from home, but it did take us a while to recover. The kids didn’t go to sleep easily that night and they’ve been talking about the rooster scare ever since.

As the kids and I walked around a different block a few days later, I thought about the chicken incident and how it could be one of those things that keeps me from walking the path with the beautiful view. I could avoid it from now on, out of fear of another chicken chase, or I could dare to walk it anyway.

Fear could make me miss a beautiful view.

One night last month, I went downstairs to get laundry out of the dryer and I saw a bat fly toward me. I hustled up the stairs and didn’t go back down there for a week. Necessity forced me past my fear, but even as I take care of laundry business downstairs now, I still wonder if there’s a bat down there.

Fear could keep me from doing what needs to be done.

Years ago, when Steve Irwin (you know, the Crocodile Hunter guy) died from a stingray attack while filming a documentary, I remember how much criticism he received, posthumously, for living such a risky life. Because it got him killed, people assumed it wasn’t worth the risk. But anyone who watched Irwin’s show (I was slightly obsessed with him at the time; I have the action figure to prove it) could sense that the guy loved his job. Yes, his job came with risk, but he did it anyway.

Fear could keep me from living an adventurous life doing what I love. 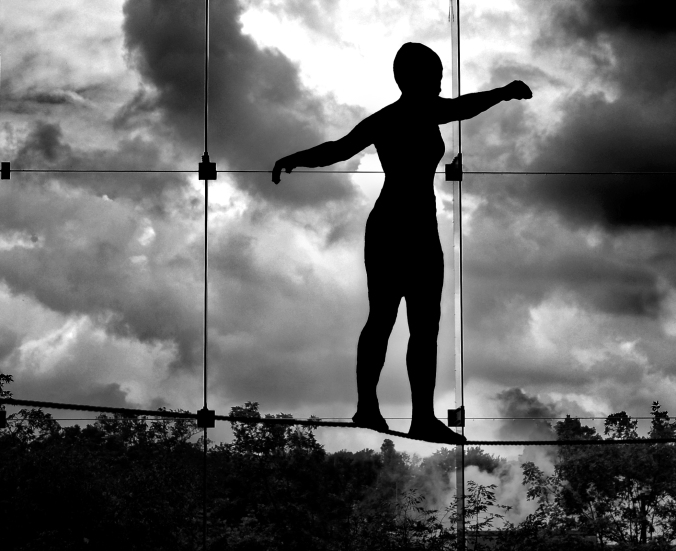 Those “why did the chicken cross the road?” jokes are probably as old as time, and honestly, I don’t have THE answer. But maybe the chicken crossed the road because he really did want to get to the other side.

Maybe he was tired of all the other chickens warning him of what would happen if he tried to cross the road. (You might get hit by a car! There might not be food! You don’t know what it’s like over there!)

Maybe he was curious. Or adventurous. Or just plain dumb.

No matter the reason, the jokes all start with the same premise: the chicken crossed the road.

And joke or no joke, we can learn a lot from a chicken.

Even if it takes me the rest of my life to cross to the other side, I’m taking the first step and kicking fear to the curb.

Who’s coming with me?

What I write about